The width of bee comb cells in natural Northern European dark bee nests ranged from 4.90 mm to 5.10 mm (Cowan 1904 following 16). At present, such cells are considered as small cells (16). At the turn of the 19th century, following the introduction of the movable frame hive and the invention of the wax foundation, the cell width was changed and standardised (16). The currently applied, so to say standard, cell width usually ranges from 5.40 mm to 5.50 mm (12, 16). It was as- sumed that increasing the cell width by approximately 10% will cause an enlargement of the apian body (16), boosting the honey yield (12, 21).

As a result of the changes described above, the width of bee comb cells in the nests of honeybees currently kept in Europe is significantly different from the original one. Apidological literature contains few and fragmentary reports on whether these changes have influenced the biological mechanisms of bee colonies that have devel- oped over thousands of years of evolution. Nowadays, comb cell width is thought to potentially affect such parameters as the duration of the sealed brood stage, the fill rate of cells with pupae, the life-span of workers and the intensity of hygienic behaviour, which may modify the resistance of colonies to Varroa destructor mites (4,9, 15, 18, 19). V. destructor is currently the principal culprit responsible for supernormal worldwide losses in bee colonies (22, 23, 31).

This study was aimed at investigating whether keep- ing colonies on small-cell combs, in combination with natural selection caused by ceasing to fight V. destructor, leads to the intensification of hygienic behavior. We also sought to determine whether the very transfer of colonies onto small-cell combs, without the natural selection caused by the lack of anti-parasitic treatment, increases the intensity of hygienic behaviour, thus serv- ing as an effective tool to obtain bees with a higher resistance to diseases.
Material and methods
The assessments of hygienic behaviour were conducted in 2011-2013 at the apiary of the University of Life Sciences in Lublin (51°13’N, 22°38’E). In 2011, a group of colonies kept on small-cell combs (small-cell colonies, cell width of 4.93 mm) and untreated for varroatosis (SM-UT) was com- pared with two control groups of colonies kept on combs with standard-size cells (standard-cell colonies, cell width of 5.56 mm), both treated (ST-T) and untreated (ST-UT) for varroatosis. The SM-UT group included 5 colonies with natu- rally mated queens. They were colonies that had survived two seasons without treatment for varroatosis out of 16 colonies that had been transferred onto small-cell combs in 2008 and no longer treated. It can be assumed that there was natural survival selection in the colonies resulting from the lack of treatment against the parasite (selection intensity of 5/16). The ST-T control group included 10 colonies, whereas the ST-UT 5 group was made up of 5 colonies. The ST-UT group stopped being treated in 2009. The queens in the ST-T and ST-UT colonies were naturally mated. They were sisters and came from the same population as the queens in the SM-UT group, but from a queen representing a colony that had not been subjected to survival selection resulting from the lack of treatment against the parasite.

In 2012, the SM-UT and ST-T groups were compared. They comprised 10 colonies each. They were created in 2011 on the basis of nuclei into which the naturally mated queens were introduced. The queens in the SM-UT group were reared from queens heading two colonies included in the SM-UT group assessed in 2011. These colonies developed the fastest in the spring and produced the most honey, thus proving its better adaptation to subsistence on small-cell combs. The queens in the ST-T group were sisters and descended from the same queen as the queens in the ST-T group assessed in 2011. The ST-UT group was created in the same way as the SM-UT and ST-T groups. However, no colony in this group survived the 2011/2012 overwintering.

In order to find out whether the transfer itself of colonies onto small-cell combs, without the natural selection caused by the lack of parasite prevention leads to an intensification of hygienic behavior, in 2013 we compared a group of colonies kept on small-cell combs and treated against varroatosis (SM-T) with the ST-T group of colonies. Both groups comprised 10 colonies each. All the colonies were created in 2012 on the basis of nuclei into which we introduced naturally mated sister queens reared from a queen representing a colony that had not been subjected to survival selection resulting from the lack of anti-parasitic treatment.

The intensity of hygienic behavior was measured with the removal rate for 100 killed pupae (brood was pierced with a 0.6 mm diameter needle; the needle test). The needle test is a standard European method for the assessment of hygienic behavior in selection for disease-resistant bees (5, 6), as well as in studies of hygienic behaviour mechanisms (3). In June, under poor nectar flow conditions, the test was performed 3 times for each colony. The pupae were pierced when their bodies were white and the eyes were purple (15th-17th day of preimaginal development). After 24 hours from piercing the brood, the cells from which the pupae were entirely removed by bees were counted.

In order to evaluate the correlation between the intensity of hygienic behaviour and the rate of infestation of the colonies by
V. destructor mites between 2011 and 2012, mites in the hive bottom debris were counted in June and classified as mature (brown in colour) and immature (cream-colored or white), and then the percentage of immature mites in the overall number of the mites was calculated. The debris was obtained by means of bottom boards with a mesh bottom and a debris collection drawer (10, 26). We assumed that colonies with intensive hygienic behavior will remove more pupae infested with the mites than colonies with a poor hygienic discipline (2, 7, 30, 32), and the presence of immature V. destructor mites in the debris may stem from a discontinued development of young parasite females resulting from the removal of infested pupae.

In 2011, the significance of differences between the mean trait values in the three groups was evaluated with Tukey’s test (SAS Institute Version 9.13., 2002-2003 license 86636), whereas the mean numbers of cells from which the killed pupae were entirely removed in 2012 and 2013 were compared with one-way ANOVA. In order to assess the connection between the intensity of hygienic behavior and the percentage of im- mature mites in the overall number of V. destructor mites in
2011 and 2012, regression coefficients were calculated.

Results and discussion
Small-cell colonies, irrespective of whether they had been subjected to natural survival selection as a result of discontinued V. destructor treatment (SM-T in 2011 and 2012) or not (SM-UT in 2013), removed dead pupae from the cells faster than both the treated (ST-T) and untreated (ST-UT) standard-cell colonies. The ceasing of treatment against V. destructor alone, without the transfer onto small-cell combs (ST-UT), did not lead to intensified hygienic behaviour, whereas the keeping of the colonies on small-cell combs enhanced hygienic behaviour, even without the effect of selection resulting from the lack of anti-Varroa treatment (SM-T in 2013).
The percentage of immature mites in the overall number of fallen V. destructor mites in the colonies in

Tab. 1. Regression coefficients between the number of cells from which the killed pupae were completely removed and the percentage of immature V. destructor mites in the total number of mature and immature mites 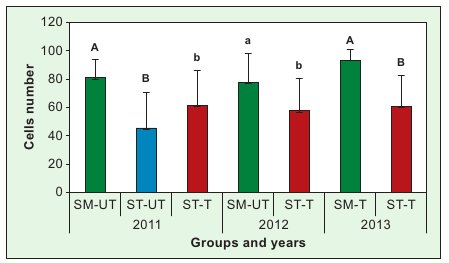 the SM-UT and ST-T groups was inversely proportional to the number of dead pupae removed from the cells, while being directly proportional in the colonies from the ST-UT group. All these relationships, however, were not significant (Tab. 1).

Whether or not subjected to natural survival selection resulting from the lack of treatment against varroatosis, bees in the small-cell colonies displayed more inten-sive hygienic behaviour than those in the standard-cell colonies (Fig. 1). This corresponds with the results of studies in which Apis cerana and Africanised bees, naturally building small-cell combs (25, 28), removed pupae infested by V. destructor more effectively than bee subspecies kept in Europe on standard cell combs (9, 24, 30). However, our study of small-cell colonies (SM–UT) revealed a negative and insignificant relationship between hygienic behaviour and the percentage of im-mature mites in the overall number of downfallen mites, which was similar in the standard-cell colonies (ST-T) (Tab. 1). This may denote a lack of connection between the pierced brood removal rate and the intensity of the removal of pupae infested with Varroa mites, despite the assumption that a more numerous presence of immature mites in the overall number of fallen mites may result from the removal of infested pupae. This observation seems to confirm the concern expressed by Rosenkranz et al. (23) about the propriety of rearing bees resistant to V. destructor on the basis of hygienic behaviour. Nevertheless, a positive correlation between intensified hygienic behaviour and an increased tolerance of bees to V. destructor was identified by Boecking and Spivak (2), Flores et al. (7), Spivak (30) and Vandame et al. (32).

Enhanced hygienic behaviour is considered to be a mechanism that increases the resistance of apian colonies to such common brood diseases as American foulbrood (AFB) (20, 27), chalkbrood (8) and others. That is why the significance of this trait increases especially now that unfavourable conditions for bee keeping in developed countries have made the insects more vulnerable to pathogens, which are becoming re-sistant to therapeutics (13, 17). The results of our study should be regarded as valuable, even though it failed to demonstrate a positive correlation between intensified hygienic behaviour and the removal of pupae infested with V. destructor. Our study shows that a significant improvement in hygienic behaviour can be obtained by a commonly available method, i.e. by transferring colo-nies onto small-cell combs, even without natural survival selection resulting from the lack of treatment against V.destructor(SM-T, fig. 1). Nevertheless, the usefulness of this method requires a final validation under differ-ent field conditions and in different bee populations, as they may differ considerably in the intensity of hygienic behaviour (1) and, possibly, in their aptitude for being kept on small-cell combs.