Lusby, Bee Culture – June 1998
The cell size debate may soon be over.
We have been trying to figure out the best brood comb cell-size for some years for our area (Tucson, AZ). It started locally, but then beekeepers in other parts of the United States, and even overseas wanted to know what we thought their best natural brood comb cell size should be also. Eventually we constructed a world map showing thermal zones and corresponding cell size.
To create the map we combined many pieces of information relative to history and world environment, such as: 1) What was the actual recorded cell size prior to the use of artificially enlarged foundation and how was it measured? 2) Where were honey bees capable of living when looking at natural zones of heat and cold during a full year? 3) Were there naturally occurring variables that could change cell size or bee habitat? 4) Would it all fit together – that is, recorded cell sizes compared to the environment they were in?
This map based on atlas composites of hot and cold land area maps accurately reflects the history of recorded cell sizes in published records prior to the use of artificially enlarged foundation. Climate and rainfall were variables allowing habitat transition into and out of recorded zones. Cell sizes are recorded in general for the zones and, where altitude dictates Humboldt’s law, should be used in higher mountainous areas and areas of higher latitude.
Every thermal/cell size zone has a small, medium, and large range to allow for bees to transition into and out of habitat areas as vegetation and rainfall vary throughout the yearly cycle. With smaller cell sizes you gain variability, and with larger cell sizes you have less. We found this published many times.
It seems logical that as you go up the hill bees get bigger to match the colder, higher altitudes, but also, they encounter less habitat to live and breed in. Therefore, when they reach the top of the mountain they have to go down again to regain variability or suffer extinction.
Some of the last of the artificially-enlarged cell size research was done round 1941 with cells of 5.4mm diameter, with the experiments lasting a good four years. Between 1957-1963 other artificially-enlarged cell size research project was undertaken with 5.65 mm diameter cells. The research was considered successful, but the experiments were done in the Romanian mountains. In that area the research showed cell size of natural honeycomb presented great variability, depending upon the altitude. In fact, when all the work was done it was recommended that bee colonies should have at their disposal honeycombs with cells as nearly as possible to the size cell which the bees themselves naturally build.
This made us wonder why we were using “high altitude honey-comb” in “low altitude areas” and then compounding the problem further by placing it into the broodnest. Could this have an impact on the disease and parasite problem? We assumed that since honey bees, mites and other pressures have coexisted for many years, it could be further assumed that something artificial – like oversized cell size – may have disrupted that co-evolved condition, rendering the bees more susceptible to parasites and diseases. So, all we are doing is placing our bees back onto the natural cell size for our area and letting Nature take her course.
We have indeed taken on a puzzle. However, we think we have now found many of the pieces. First, we put our bees on 5.0 mm cell size foundation by making over 40,000 sheets for our brood nests. A long drought forced us to reconsider this cell size though. We have now placed into the field over 4,000 frames of 4.9 mm cell size foundation. That was done in 1997 during the drought and before going into Winter with our bees. We culled heavily to get the job done, shaking down our hives into only 1-2 deep brood boxes to over-Winter.
We spent this past Winter preparing over 10,000 frames with 4.9 mm cell size foundation to put onto our bees between March and the end of July this year. We’ll put on as much extra as we can until frost in November using an additional 10,000 frames of 4.9 mm foundation that will be ready by mid-Summer. That will give us a total of 24,000 frames of smaller, more natural 4.9mm cell size to use once and for all if going back to natural sizing works well for disease and mite control.
The experiments performed in 1941 and 1957-1963 that pointed to the “bigger is better” theory were done with an average of 5-6 colonies. Those experiments changed the world’s beekeeping industry. It became the belief of the day that bigger was better – for more honey, for less swarming, for ease of extracting and spinning out honey. But in the end, what did we gain?
We don’t experiment with only 10 frames or even a few hives as a basis for saying whether or not something works. We’re considered small commercial beekeepers, and averaged 900-1100 hives up until the mites came. We believe we’ll never manage over 700-800 hives with a more intense, smaller, natural bee management system, but we also believe it will be profitable. With El Nino’s help this past year producing lots of plants in the southwest desert, we’ll see how much 4.9 mm foundation our bees can draw out. 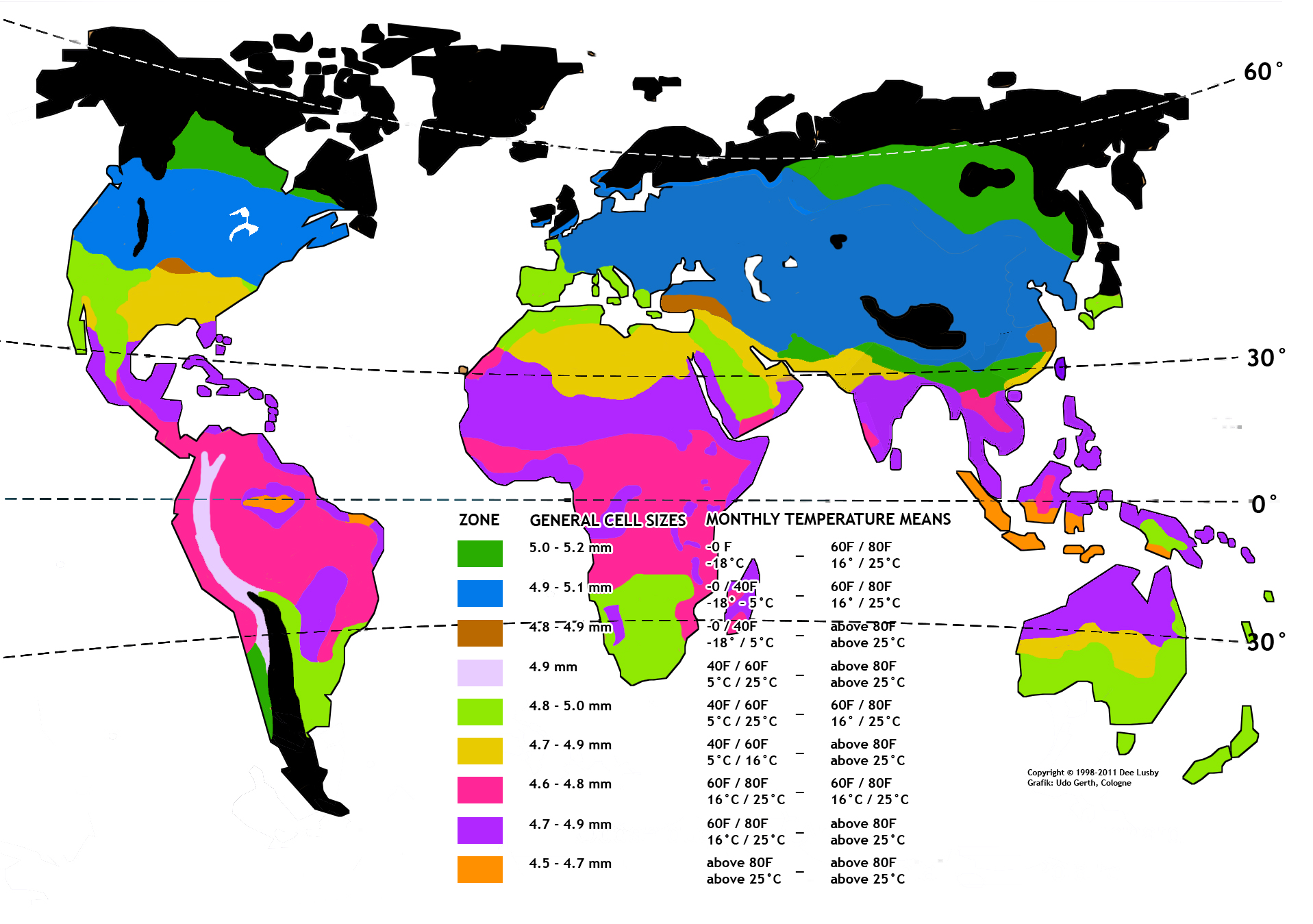 Honey Bee Thermology/Cell Size Zones
We can only come back now as fast as we can draw comb. We’ve been sitting under a mesquite tree now for nearly three years waiting for the chance to draw a large amount of comb. We’re ready. It will be a challenge to see if we can retool all our combs, with the goal of running 700-800 hives, by the end of 1999. all in 4-5 deeps, but if we make it so can everyone else.
Look at the thermal/cell size zone map (see right). So far everything is pretty much matching up. The trouble is, now the questions start. What have we lost by having too-big bees relative to crop pollination? Is there an upper cell size limit for controlling mites relative to altitude and cooler latitudes? What’s the relationship of cell size to disease, chemical contamination, pesticide sprays, inbreeding, pollen and propolis for human cures? Are there limits to taking bees out of one zone and placing them into other zones? If so, is it beneficial, or detrimental?

Managing Colony Genetics by Grafting and Selecting for...

“Housel Positioning” – How I View Its Importance...